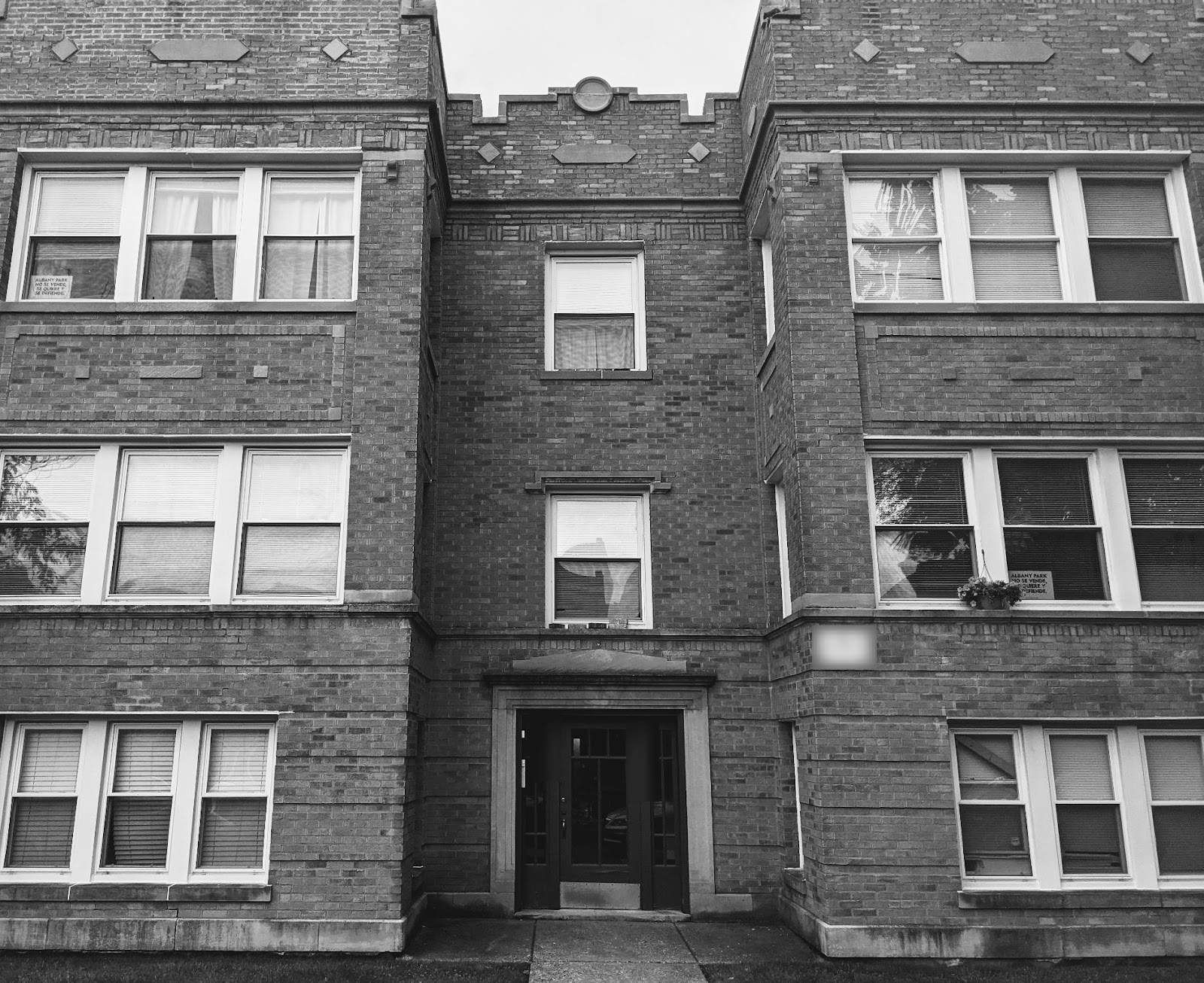 This document is written by two lead organizers in the Eastwood Tenants Union (ETU) to summarize the ETU project thus far at the heels of its first major struggle against the landlord. On February 8th, 2022, ETU reached an agreement with the building’s landlord for rent. After a struggle against massive rent increases for tenants, ETU has been able to reduce the initial increases significantly as well as get the landlord standardize the rate for rent in 2022 for all tenants in the building. We wanted to write this document to reflect on the successes and failures of the ETU thus far in order to more clearly struggle against gentrification, capitalism, and parasitism.

The ETU was formed in the summer of 2021 by a group of tenants in the Albany Park neighborhood and it’s founding story can be read here. We want to quickly outline the strategy and tactics conceived by the organizers at the onset of the union’s formation

The immediate objective of the union was to get the landlord to make fixes they had been neglecting for years. The long term strategy looks something like this: use immediate tenant issues as a tool to keep rents low, raise up tenants to a position where they have to be negotiated with by the landlord in terms of rent and keeping it low, and connect the tenant struggle to the anti-gentrification struggle in Albany Park.

Tenants rights: One of the main tools for tenant organizing in Chicago of all political assuasions is the Residential Landlord Tenant Ordinance (RLTO). This Ordinance outlines tenants rights in the city, what things must be addressed by the landlord or tenants can withhold certain amounts of rent, as well as protections for tenant union organizing. The RLTO is cited by every tenant organizing group in the city. Learn what tenants rights exist in your area. It will come in handy as it has in our experience.

“Campaign of Harassment”: The general strategy of the ETU is what we termed the “Campaign of Harassment”: berate, pester, and attack the enemy as much and as often as possible to overwhelm them and use this as leverage to build a case against rent increases. From the beginning, this was an agreed upon tactic by all ETU members. All communications with the landlord happened though the ETU’s email which all tenants had access to so all communication could be documented. Always make sure to have documentation of all the landlord’s communication with tenants.

First, the ETU would consistently email the landlord about repairs that needed to be made, at least once a week with follow up messages when repairs did not get fixed. Everything from serious fixes like leaks, damaged windows, and mold to cosmetic concerns. We would always cite RLTO as justification for the landlord to make these fixes no matter what, reminding them we would be able to withhold rent if these repairs were not done in a timely manner. Initially, this got a lot of fixes done very quickly. As soon as the landlord slowed down (which they did when the landlord got tired of dealing with the union), ETU members collectively withheld the entire rent for 5 days. This is the maximum amount of time tenants in Chicago can keep rent until they will accrue late fees. Fixes were then done immediately.

After several months of this, the landlord began playing hardball. Maintenance requests began to go unanswered and when the union followed up, the landlord made excuses. This is when the union escalated the tactics to phone zaps, clogging up the business line for the landlord’s office for a few hours to interfere with his business. When employed, the phone zaps were major turning points in the union’s struggle with management. We had discussed several times of “marching on the landlord” by having all the tenants united marching into the office to make demands. We have yet to utilize this tactic but it would not have been hard to do at certain points. We utilized contacts to send letters of support to the landlord, emails telling the landlord to work with the union. We used People’s Voice to propagate the union’s struggle and perspective, and further expose the enemy. There are many other tactics that can be employed in this struggle.

Through this series of tactics, the idea was to highlight the unwillingness and incompetence of the landlord while also increasing the confidence and fighting capacity of the tenants in the union. When the leases for union members began to open up in the resigning period, the months of documented interaction between the union and the landlord could then be used by the union to struggle to re-negotiate rents. This can happen in a few ways. Originally, it was thought that by having a documented history of poorly performed, half done, or ignored maintenance requests, the union could say any proposed rent increase could not be justified, thus initiating a larger public pressure campaign to highlight the conditions of housing in the area and show tenants taking a stand against it. However, how it worked out in our case was fighting the landlord on the basis of retaliation against a few tenants, another clearly outlined right of tenants in the RLTO, and exploiting that contradiction in order to raise the entire union to the negotiating table.

Struggle for the Rent

The ETU was able to negotiate the rent for the building through a process of drawing the enemy out to attack us. By applying the above tactics to our struggle, we had anticipated the landlord would try to destroy the union in some way, heightening the contradictions further between tenant and landlord, and advance the struggle to a new and higher stage. For us, this took the form of two units (one including the writer) having major increases in the rent and new lease conditions that did not match the original ones (one unit has pets which the landlord removed and the other unit was allowed to smoke indoors which was revoked). These units were the only lease renewals for the union at this time, our other members had re-signed before the union was established. The rent increases were significant in that they had shot up from a 1-2% increase to a 10% increase.

The RLTO 5-12-150 clearly outlines protections for tenants, and in particular for unions, against retaliation. This is outlines here:

“It is declared to be against public policy of the City of Chicago for a landlord to take retaliatory action against a tenant, except for violation of a rental agreement or violation of a law or ordinance. A landlord may not knowingly terminate a tenancy, increase rent, decrease services, bring or threaten to bring a lawsuit against a tenant for possession or refuse to renew a lease or tenancy because the tenant has in good faith:

(a) Complained of code violations applicable to the premises to a competent governmental agency, elected representative or public official charged with responsibility for enforcement of a building, housing, health or similar code; or

(b) Complained of a building, housing, health or similar code violation or an illegal landlord practice to a community organization or the news media; or

(c) Sought the assistance of a community organization or the news media to remedy a code violation or illegal landlord practice; or

(d) Requested the landlord to make repairs to the premises as required by a building code, health ordinance, other regulation, or the residential rental agreement; or

(e) Becomes a member of a tenant’s union or similar organization;…

…In an action by or against the tenant, if there is evidence of tenant conduct protected herein within one year prior to the alleged act of retaliation, that evidence shall create a rebuttable presumption that the landlord’s conduct was retaliatory.”

This is what we knew: the new rent increases were significant and were a major shift from the previous lease signings that happened before the union was established in the building. Through investigating other buildings the landlords owned in different neighborhoods (waiting outside of buildings to speak with some tenants about rent) we learned that other leases signed recently did not have the same kind of increase. Rather, the increases tenants in other buildings management owned aligned with what previous tenants in this building faced, 1 to 2% increases. We initially felt like this was a clear case of retaliation. However, the reality of living in a neighborhood like Albany Park, where landlords and developers are actively gentrifying the area, we also knew that these increases were not unprecedented for the area. Through investigating Albany Park too we learned that these kinds of increases were not an anomaly with handfuls of people we had asked about recent rent increases stating similar amounts. Regardless of the reason, this was a contraction to exploit and use to the advantage of the tenants.

Through exposing the landlord and leaning on the claim that the landlord was retaliating against tenant organizing, we were able to quickly mobilize many different organizations and people to support our cause. By raising the issue as one of illegal action by the landlord, we were able to get them to go on the defensive. The union forced them into a position where they would have to start negotiating. By raising the union up to the level of negotiations the union can continue to push and build more power against the landlord.

A public pressure campaign was thought out with a plan of escalation. In conjunction with building up plans to escalate our actions, we sought the assistance from lawyers. Though none of them ended up taking us on, the landlord didn’t know this and we would insist our lawyers were looking into the matter as well. The landlord has attempted many times to destroy the union by getting members to turn against one another by calling individuals rather than communicating through the union email. The landlord tried this under mounting pressure and failed due to the union members’ discipline and understanding of the importance of documentation. The union also received marginal support from the DSA member alderman who wrote a letter of support for the union and spoke with the landlord at the beginning of the campaign. It took 3 weeks for the landlord to finally come to the table with meeting union demands, and only a few days later meeting all the demands the union had set out.

In conclusion, we were able to negotiate rent and protect tenants through a long term strategy of setting the stage for a more decisive struggle. By understanding the contradictions at play and knowing when to exploit them, we were able to raise a small union of tenants to a more powerful organization the landlord has to deal with. We made plenty of mistakes along the way and we will want to continue to look for more ways to build a militant tenants union / movement struggling for power from the grassroots.