Author’s note: All names in this story have been replaced with pseudonyms at the request of the interviewee, in order to protect his identity. The story is otherwise presented unaltered. 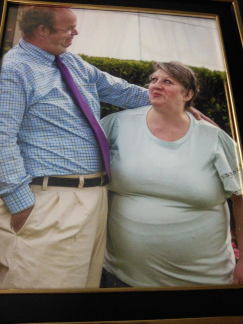 When asked to describe his wife, Mr. Ninety-One spoke of her universal love for the world around her. “She loved everything about life,” he said. “She loved trees, she loved animals. She  used to love the dirt. She used to tell me, ‘Don’t kick that around!” Would drive me crazy!” Mr. and Mrs. Ninety-One met ten years ago, and spent nearly every moment together  from that point forward. Living together while homeless in Chicago, Mr. says they were  deeply in love, but explains they were never able to legally marry.  “She didn’t have papers, so Amerika wouldn’t allow us to marry,” he said. “I call her my  wife because I love her.”  Mrs. Ninety-One was born in Canada and moved to the US when she was young, becoming an undocumented immigrant and a target for state violence in the process.  The realities of homelessness and chronic illness loomed over her for the rest of her life  – right up to when an arrest by ICE and medical abandonment directly caused her death in December 2020. “One minute, you’re waking up, there’s a person there,” Mr. Ninety-One said. “The next  minute, you wake up, and you see the fucking urn. And you say to yourself, ‘What the fuck happened?’”

ABANDONED IN THE IMPERIAL CORE

Though to Amerikan imperialism Mrs. Ninety-One was just one more victim among  untold more, Mr. now struggles to survive in his life without her. Now living a long way from Chicago, he wants to share his wife’s story in order to bring some amount of justice  to the system that murdered her. “This has been my goal since she stopped breathing,” he said. “Justice, justice, justice,  justice. This is about her, and her legacy is going to live on.”  Mr. said following her move to the US, Mrs. lived with an abusive step-family in Chicago.  Like many undocumented children in the area1, she was forced into long hours of labor at a young age, cleaning horse manure and moving heavy objects at the family’s home. It was this exploitation, Mr. said, that gave her a lifetime of health problems.

“They used to make her look work like a dog, she used to sleep on the floor of the  place,” he said. “That’s how she got the two tumors on her left side of her abdomen,  because of all the lifting she was doing.” Mr. later met Mrs. around ten years ago, and they soon began living together as  partners while shifting in and out of homelessness. Despite their struggles, Mr. said she  retained her love for life and for other people, adding that “she got a thrill out of doing things for people caring for others.”

Her greatest love, though, was for animals – when they lived in an apartment, she  would often feed stray cats from the alley window. Mr. recalled when one such cat  climbed into the room and became their permanent pet. “So she says, ‘Look at my room,’ and there was a little kitten,” he said. “Julius, after I  saw him, I couldn’t get rid of him… he was her pride and joy.” As time went on, Mrs.’ health problems grew worse, and they sought medical care  within Chicago. But the only things the imperial medical system could offer the couple  were empty promises and insurmountable bills, showing yet another angle of  capitalism’s murderous abandonment of the houseless masses.2

“She kept on getting promises from people in Cook County Hospital,” Mr. Ninety-One  said. “But every time she went for an appointment they would say ‘Oh, we can’t help you  because it costs too much.’”  After failing to find healthcare in Chicago, Mr. says they traveled to Wisconsin,  Alabama, Florida and Ohio in search of help, to no success. It was in Sandusky, Ohio that they resorted to a desperate tactic.

LOCKED UP AND LOCKED OUT

Crossing from Amerika to Canada for cheaper medical care is so common, Canadian  law explicitly allows discrimination against immigrants with disabilities or chronic health conditions.3 Even at the crossing of two settler-colonial states, the masses are left to  fight and take great risks to simply survive.

With no options left, Mr. and Mrs. Ninety-One boarded a ferry on the shore of Lake Erie  under cover of night, hoping to step off in Canada. But before they could make it, they  were asked for their passports by a boat worker.

“[Mrs.] didn’t have a passport because of her situation, she didn’t even have ID,” Mr.  said. “We get there and there’s six Border Patrol officers waiting for us.”

The Border Patrol agents arrested Mr. and Mrs. Ninety-One and questioned them on  Peele Island, forcing Mrs. to sit outside in the rain for over eight hours. At one point  during transport, Mr. was tackled, brutalized and arrested by Border Patrol officers for trying to remove a guard’s hand from his shoulder.

“The guard was squeezing my shoulder, and I turned around to tell the guard, ‘Don’t  touch my shoulder,’ and they tackle me down to the ground,” Mr. said. “One guard had  his gun out and the other had his knee and my back. When they let me up, a cop from  Sandusky was there and they said, ‘You’re under arrest for assault.’”

Once they returned to Amerika, Mr. was released from custody, while Mrs. was moved  to an ICE detention facility in Tiffin, OH, where should would be caught in the lethal web  of Amerikan immigration courts. Mrs. was held there indefinitely as her case was given multiple arbitrary continuances.  ICE concerntration camps are well known as sites of medical violence and genocide;  one site in Georgia was previously exposed for forcing hysterectomies on detainees in a  genocidal sterilization scheme.4

Mrs. was repeatedly denied medical care during her time at Tiffin, as Mr. worked on the  outside to free her. After two and a half months of continuances and fighting, Mrs. was  finally freed, and they both returned to Chicago.

During this time, Mr. said they moved between shelters and friends’ homes, desperately  searching for help.

“I was trying my hardest to get her help,” he said. “I tried everything I possibly could,  and I failed.”

In December, while staying at a friend’s apartment, Mrs. began bleeding vaginally, but  refused to go to the hospital. One morning a few days later, Mr. found her lying facedown in the bathroom, unresponsive and with a weak pulse.

“I call the paramedics, they said that they would be where we were in 30 minutes…  She’s dying, we don’t have 30 minutes,” Mr. said. “So they told me we were two blocks  away from a hospital, and if you’re in such a hurry, you can walk her to the hospital.” Mr. lifted her into a wheelchair and rolled her to the nearby hospital. He said when they  arrived, hospital workers denied him entry beyond the waiting room and forced him to leave once Mrs. was fully admitted, citing COVID protocols. When Mr. tried to text Mrs. the next day, he received no response. He later called the  hospital asking for an update; a doctor informed him that Mrs. had died. She was fifty eight years old.

Yet even this was not the end for Mr. Ninety-One. A few days after visiting the hospital  again to identify Mrs., he received a call from a doctor.

“He says, ‘We got to hold her remains for a while,’” Mr. said. “I said, ‘That’s okay,  because I don’t have a place to put them. He says, ‘No, we gotta hold them because Homeland Security won’t release them.’”

After contacting a friend for help, Mr. was able to have Mrs.’ remains released to him through a funeral home – albeit with no choice other than cremation. Soon after, he traveled to where he is today, in possession of Mrs.’ ashes in a large urn.

A few weeks later, Mr. received one more call from a nurse at the hospital, who said that  Mrs.’ death was ensured by medical neglect.

Medical malpractice and wrongful deaths are far from uncommon in Amerika, especially in Illinois.5 But with these factors of intentional neglect and covering-up by medical staff  and the Department of Homeland Security, Mr. says he’s seen how Amerika will treat its  own citizens, forcing his image of the country to fundamentally shift.

“If there was Amerikan flag here right now, I would piss on it,” Mr. said. “I used to be gung-ho about Amerika. But now, I just can’t take it.”

Mr. still struggles with homelessness and finding work to this day, as he stays in unstable temporary housing. The area he resides in is highly reactionary, and he fears  facing ostracization and eviction before he can find a job.

FTP-CHI is running a fundraiser to support Mr. Ninety-One in finding more stable housing, as well as to help with other basic living expenses. Our goal is to raise $2,000  to cover Mr.’s security deposit, first month of rent, and all moving expenses.

For now, Mr. Ninety-One said he will continue trying to spread Mrs.’ story, wishing he could still be together and happy with his partner. During a memorial service held in her honor last month, Mr. spoke on the importance of this to his entire life.

“I am fighting to keep her memory alive, even though there are some out there who  want to act like she never existed,” Mr. said. “She was my true love, soulmate and best friend. I miss and love her. She will not be forgotten.”

3. “Some living in U.S. eye Canada for health care, but not everybody can get in”,  Emma Davie, CBC.