If the government does not provide housing, then the people must take it for themselves.

North Philadelphia resident Jennifer Bennetch and other community members connected through #OccupyPHA quietly started moving families into vacant properties upon the coronavirus outbreak in March 2020. Long before the coronavirus outbreak, Bennetch was already tracking vacant properties owned by the Philadelphia Housing Authority as part of her long-term effort to expose and eradicate PHA’s unchecked corruption. Bennetch and many houseless Philadelphian residents decided the benefits of squatting outweighed the risk, as Philly’s crowded homeless shelters are a deadly hotbed for outbreaks, and hotel quarantine rooms are inaccessible to families. The families worked together to rid the homes of bugs, turn on utilities, paint the walls, recarpet the floors, secure the roofs, and build good relationships with their neighbors. They deliberately targeted vacant public housing properties instead of private properties, to demonstrate that the Philadelphia Housing Authority already owns the means to end homelessness. OccupyPHA’s successful effort to rehabilitate buildings and shelter families draws a powerful, uncompromising conclusion: this city can house the houseless, but its rulers don’t actually want to. That is why the masses must seize what their greedy dictators won’t provide.

PHA has a $400 million annual budget, and received two $30 million choice neighborhood grants to redevelop the Sharswood neighborhood in North Philadelphia. In 2015, PHA seized 1,300 properties in Sharswood through eminent domain (at least 800 privately-owned properties), paying homeowners less than half of the properties’ assessed values. They built a $45 million headquarters in Sharswood in 2018. Every year, PHA auctions off properties they seized to private developers, alleging they can’t afford to maintain and utilize them for affordable public housing. While exploring many of these now-vacant PHA houses, Bennetch noticed a trend of PHA intentionally cutting holes in roofs to make the houses uninhabitable by HUD’s guidelines on water damage, justifying the sale of properties to developers as part of a fixed agenda to gentrify and “campusify” neighborhoods like Sharswood. The private developers don’t restore units to long-time neighborhood residents; rather, they sell and rent them to wealthy newcomers and Temple students. Low-income and houseless Philadelphians can’t even obtain public housing anymore, because PHA closed their Public Housing Program waitlist in 2013, as well as their Housing Choice Voucher Program. They have yet to house applicants from 10 years ago, and claim they are literally unable to do so. If a few private citizens are more capable of rehabilitating houses and sheltering families than a housing agency with a $400 million budget, why does the Philadelphia Housing Authority exist? #OccupyPHA’s restorative program is a bullet in the barrel of their principal demand– that all of PHA’s vacant properties be transferred into a community land trust, designated as permanent low-income housing, under community control:

“We’ve been able to take 10 families off the streets just during this pandemic and our housing authority will sell these houses and they’ll say that they’re not viable. Doing 10 homes we’ve spent less than one thousand bucks. We’ve been doing the best that we can, and we do plan to continue doing this until they sign the properties and the land trust. Nobody should be homeless while there are vacant houses that are being maintained by tax dollars and being designated as low-income housing for Philadelphians, so we plan to continue. If anyone would like to assist us in identifying, locating, or has individuals in need of a place, then we’re willing to help them identify. Because this issue– we have 200 homeless people in an encampment on the parkway right now. [PHA and the City] are failing in their duties, and we’ve shown through this proof of concept that the people of Philadelphia as a collective are more able to perform the duties that this Housing Authority is failing in.”

The encampment of 200 on the Benjamin Franklin Parkway began on June 10, 2020 as another effort to demand housing and establish shelter that our violent, futile government systems fail to provide. The effort was coordinated by OccupyPHA, Workers Revolutionary Collective, and Black & Brown Workers Cooperative. Camp James Talib-Dean (named after one founding organizer who passed away) began shortly after the Philadelphia Police Department violently destroyed the Convention Center Encampment, ensuing a deadly coronavirus outbreak at Our Brother’s Place shelter, where camp residents were funneled. Camp JTD started with only 5 people pitching tents in Center City Philly’s main tourist strip, as an explicit act of protest, demanding community-controlled permanent housing for all homeless Philadelphians, and demanding disbandment of the Philadelphia Police Department and all private police forces. Within 3 days it blossomed to nearly 150 residents. The perimeter of the camp is lined with signs declaring their demands and camp rules, including self-designation as a “no-cop zone” under self-governance of the residents. 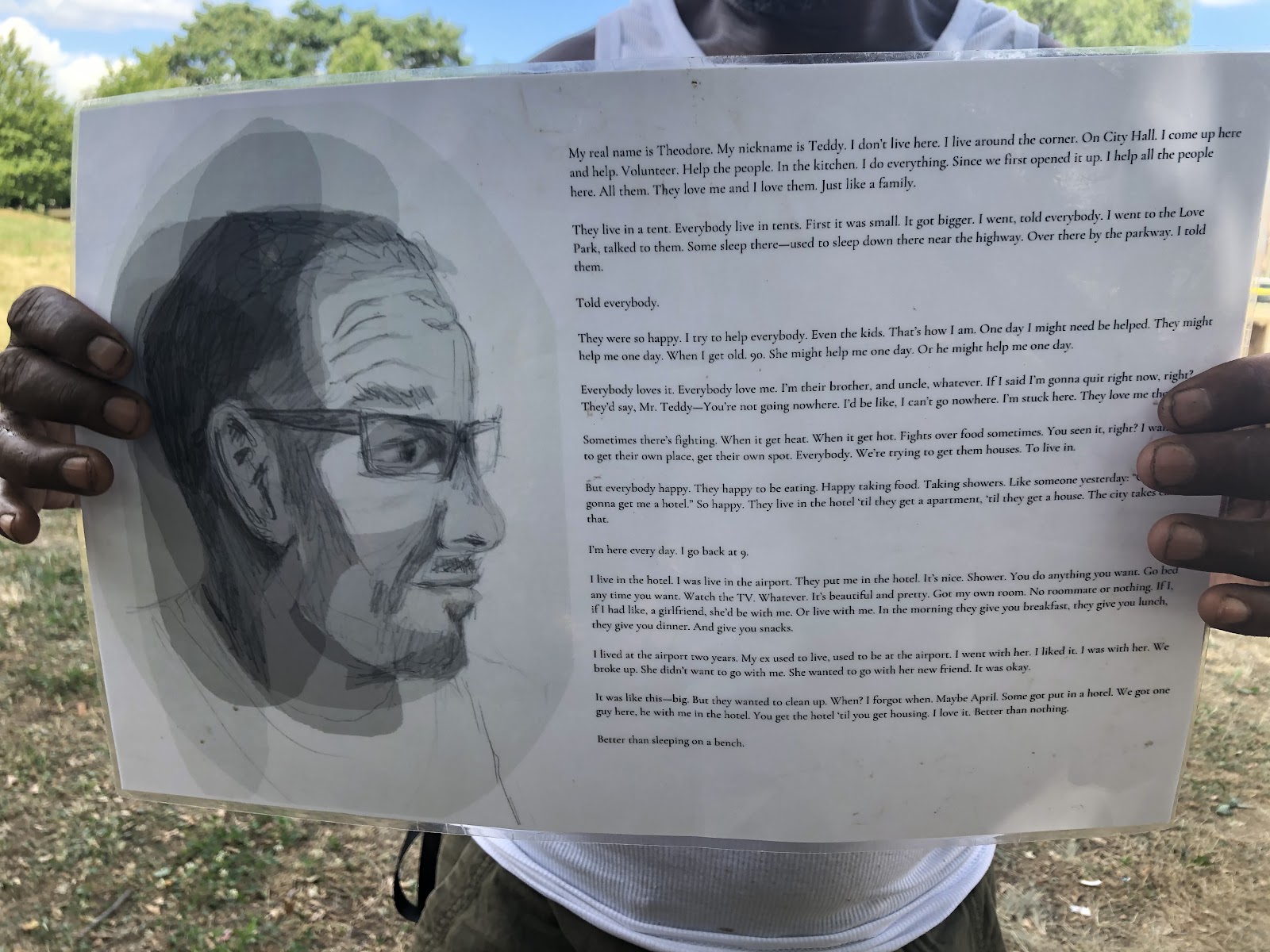 (June 30) Teddy, teaching every supporter why they were called to defend Camp Teddy.

Critics of the camp correctly assess that encampment-living is an inadequate solution to houselessness; encampment-living is not safe or healthy for anyone in a city like Philadelphia. But, these critics do not acknowledge that housing is the only viable solution to houselessness, and it is the City and the Housing Authority who neglect to provide it. Critics ignore that living in an encampment is a far safer and stabler alternative to living in a shelter during the pandemic, or sleeping alone on the streets. These critics also overlook the camp’s fundamental objective as a protest, demanding permanent housing and an end to policing. The residents don’t want to permanently reside in an encampment on the Benjamin Franklin Parkway. They want to permanently live in a house, and they want freedom from constant state brutality and surveillance. They’ve united around this encampment as– not just as temporary shelter– but as a public action to invert the systems that keeps them unhoused and surveilled. While hundreds of PHA properties lie vacant and viable, the City and PHA still refuse to offer permanent housing to even a single camp resident.

On June 29, thirteen JTD residents pitched a second encampment on the vacant park grounds across from PHA headquarters. The second camp was a strategic move to increase pressure on PHA and the City. Perhaps PHA could write the Parkway encampment off as the City’s problem, but how could PHA ignore an encampment directly across from their 45 million dollar headquarters?

That night, PHA promptly mobilized their maintenance team, police force, and Mayfield Site Contractors to erect a chain link fence around the encampment, to either cage residents in or scare them away. The residents were not afraid, but enraged! Rather than flee the campsite, the residents resolved to stay planted at PHA headquarters to fight for their demands. By 7am the next morning, residents ensued a protest, demanding to see the contractor’s permit, sharing their horror stories under PHA’s tyranny, and shaming the PHA workers for building a cage around their neighbors:

“So everybody who’s out here hollering about how Back lives matter, do Black lives still matter when they’re homeless? When they’re on hard times? Or do only Black elite lives matter to you? Do you not know how close you are to being in the same position as them? Because Kelvin is a firing ass motherfucker, and will kick y’all right to that curb. Ok? So all of y’all– especially y’all– should really be ashamed of yourselves, out here terrorizing homeless black women for a measily ass fucking paycheck. Y’all probably still owe mortgages, struggling just like everybody else, and you’re gonna terrorize people, and you don’t have to do it! Because you’re allowed to not do anything that you don’t believe in, that goes against your ethics, and your morals. But you CHOOSE– you’re not forced– you CHOOSE– and if you chose not to do it, you could sue the shit outa them and be rich if they fired you. But you choose to terrorize your own people so that you can keep your jobs that you’ll probably lose anyways! That you’ll probably lose anyway! Because soon as you speak up or address one of them– I done have people that work through the union for PHA come down and tell me their stories about being fired, and then the union wouldn’t pay for their attorney fees, cause they want to stay in good with PHA…This CEO is paying himself $353 thousand dollars a year… And these CLOWNS over here is not even making a quarter of what he’s making and they’re out here doing all his dirty work.”

When PHA workers persisted to erect a fence around the back side of the park (the side owned by the City, NOT the Housing Authority), residents cast the fence poles into the street and sat against the park’s pre-existing wooden fence to block construction. More and more supporters gathered at the new encampment throughout the day, and struggles with the PHA police & contractors culminated in a standoff between a bloc of protestors against PHA contractors in bulldozers & cement mixers. When PHA’s forces finally retreated in the evening, residents and supporters erected their own barricades to prevent further construction. They repurposed the metal poles, hammered together wooden pallets, and a crowd of +30 people even rolled two massive fallen trees to the border of the camp. They named the site, “Camp Teddy,” after an elderly resident with a dire heart condition. Throughout the day, Teddy kept showing supporters his heart monitor to remind them that they are not just fighting to defend an encampment, they are fighting because nobody should live in an encampment like this.

The conspiratorial state media persists in painting these revolutionaries as “unstable” belligerents, who senselessly resist the city’s services. Corporate media won’t acknowledge that these displaced Black Philadelphians are fighting for security that has been robbed from them, and for community self-governance. The state is terrified by this community’s complete resolve to reverse their relationship to Philadelphia’s public housing by taking control of it themselves, invert  “homeless services” by conducting it themselves, and to reclaim the land seized from them and their families for the sake of gentrification.

On July 10, the City released a notice that the Philadelphia Police Department will clear Camp JTD by July 17 and destroy the residents’ property if they fail to disperse. On July 14th, they served a notice that they would also clear Camp Teddy on the 17th. But where will the residents go? If the city is not dispersing the encampment by housing residents, then where will the residents go? Does the city expect them to relinquish their autonomy to a violently repressive police force & shelter system after weeks of liberatory community practice? Are not the #OccupyPHA squatting effort, Camp JTD, and Camp Teddy protests all offensive fronts of the same class war to secure land for Black and Indigenous people, abolish state policing, establish physical & economic stability, and govern one’s own community? This week, we defend Camp JTD from disbandment by the state. If the government does not provide housing, then the people will take it for themselves!

All out in defense of the camps!

It is right to rebel!